While I was in Anaheim for Educause this past October, my boss and I got to visit Disneyland on the Friday afternoon when the conference finished. Since we weren’t flying out until dawn the next day, we had an afternoon and evening to see the area. I had never visited a Disney park with a non-family member before, so this was a new experience for me.

As many will say, Disneyland feels a lot like the Magic Kingdom in Disney World. However, it does have quite a few other rides – though we weren’t able to ride several due to them being down in order to decorate for Christmas – including It’s a Small World. This was such a shock to me. At Disney World, decorations seem to happen magically overnight. Disneyland had a much more hometown park vibe than any of the Disney World parks.

One of my goals in going to Disneyland on this trip was to decide if we should make a special trip here for vacation. Verdict – if we were ONLY going to do Disneyland, I would not fly across the country for it. But if we were going to combine that trip with Disney’s California Adventure, the beach, and a partial cross-country jaunt to see the Grand Canyon, Hoover Dam, or Carlsbad Caverns, I’d definitely include it.

I’m fairly spoiled when it comes to Disney parks. We usually plan our Disney trips months in advance, make sure we have meals and rides set up with fast passes. We expect to be able to adjust fast passes on the fly using the My Disney Experience app. Going to Disney World is like going to a park in the 21st century. Going to Disneyland is like stepping back in time to the parks I visited as a kid. It was quaint receiving a paper ticket to get into the park. The idea that they offer hand stamps to allow you to return to the park is old-fashioned. Fast Passes are handled by inserting your paper ticket into a machine and receiving another paper ticket with a return time on it for the ride. It left a good feeling to be able to hand a couple of kids our return tickets for Haunted Mansion at 9 p.m. when we realized we were both tired at 5:30 p.m. and needed to leave the park in order to get up before the crack of dawn the next day. That’s something you can’t do with the Disney World fast pass system.

Disneyland has the feel of a hometown park. And it’s obvious that the majority of people attending are locals. I’d read that you don’t want to visit Disneyland on the weekends. As soon as 5 p.m. came on Friday, the park went from comfortable to crazy busy within minutes. My boss and I both felt boxed in and too crowded. In the short 3 hours that we’d been in the park, we had been able to ride Star Tours, Matterhorn, Pirates of the Caribbean, listen to music on the Mark Twain Boat, listen to the Barbershop Harmony group, shop, and sing along with with a character in Frontierland.  We were not in a rush. We were ambling along and taking the time to look at the art and details. After the locals came, wait times tripled. The only thing we had really wanted to do that we didn’t have time for was ride Haunted Mansion, but between the locals and this being the Friday before Halloween, it was no surprise that fast passes for that ride were rarer than gold.

Just an aside – those who say Pirates of the Caribbean at Disneyland is better than the one at Disney World are correct. It was longer and had more details; I was impressed. 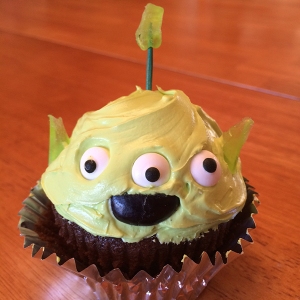 I admit it. I look at Pinterest and feel like I should be able to throw together this awesomely amazing birthday party for The Boy in my spare time. Then, I remember I work and don’t have spare time. I do try to do something cute for his birthdays though. We don’t go all out. We only have family over to celebrate. He’ll have a big party with friends in a few years, but right now, we are keeping it small.

And it all starts with Halloween.

Coordinate decorations between holidays to save time and money.

Wait – you say. Why are we mixing Halloween and birthdays? Here’s why. Our church does a Trunk or Treat every year where you decorate your car for the kids to come along and get candy. What I did this past year was use the decorations that I planned on using for The Boy’s birthday in February for the Trunk or Treat car in October. Meaning, I got to re-use this stuff and I only had to make one trip to the party store. Score! How does this work with a toddler’s attention span? By using the same decorations and allowing him to continue playing with them in between Halloween and his birthday, we’ve been lucky enough that he continued to like the idea of having his birthday be the same thing he was for Halloween.  We didn’t do this the first two years and it might not be possible this next year, but it’s something to consider if you have an obsessed kid.

This past year, we also had our first trip to Walt Disney World with The Boy planned. We knew we’d be there during Mickey’s Not So Scary Halloween Party, so we decided to coordinate Toy Story inspired costumes for the Party, the Trunk or Treat at church, and his birthday. Getting to use some of this stuff three times made my frugal self happy and it made decorating and planning a LOT easier.

Now for the Cupcakes

This is not so much a recipe as an assembly guide. I don’t have time to bake things from scratch. If you’re honest, you probably don’t either.

Why? They’re cheap and that means you can fit the entire batch of batter in two pans and not have to bake for twice as long.

24 cupcakes takes just slightly under a 1/4 cup batter each for a typical boxed cake.

I bought one of those Toy Story cup cake stands, but I think these would have been just as cute lined up in rows. I will say that I was pleasantly surprised with how sturdy this stand was for being only a few dollars. I think it might be worth it, though, to invest in a real cupcake stand for the future. 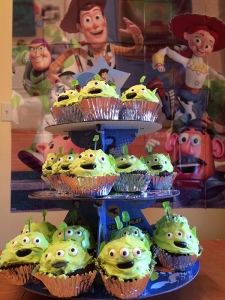 Now that your army is complete, you can take over the world.