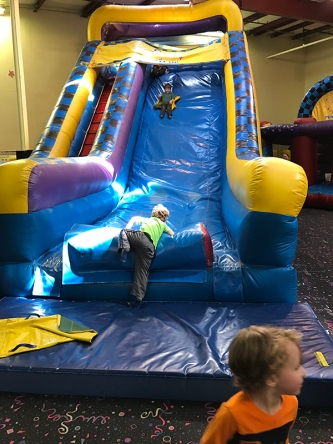 My son has a winter birthday. That means, we can’t plan on having his birthday party outside. Normally, we just do cake and ice cream at home with the family. But for his fifth birthday, we felt we really ought to have a party. This was a major birthday and would be his last chance at inviting kids he’s spent his entire life with at daycare.

Looking around town, there are several options, Chuck E Cheese, a couple of gym places, but the place that seems to be the post popular with the five-year-old set is Pump It Up.

Here are some of the things I really like about it:

What could be better:

Their directions and how to find the building. This place is awful to try to find. The first time I went there, I followed my GPS, which tried to send me a 1/2 mile further down the road. Coming into the building, it looks rather sketchy and there is not a good sign to really tell you that you’ve arrived. It actually appears like you’re going into the back door of the business, rather than a front door. They need a bigger and better sign to let folks know they have arrived. Trying to explain how to get there to my son’s grandparents from Nashville was an adventure, and their GPS also sent them the wrong way.

But that’s really it for what could be better. Just remember, the place is so popular that you have to book about a month in advance – minimum.

I wouldn’t do it every year, partly because I feel like a child shouldn’t have an all-out mega birthday party ever year, but also because it is a pretty big chunk to spend. But, we also didn’t get him a big birthday gift either like we had in the past. And that’s something to think about. Does a kid really need a big gift they will not play with much, or do the experience and the memories matter more?